If you are in need of a story of hope and humanity right now as the world struggles to fight off the Corona Virus look no further than The Day the World Came to Town by Jim DeFede. This is an endearing story of how a town of people came together when the world needed their kindness the most. The book tells the story of actual events that took place in Gander, New Foundland, Canada at the Gander International Airport.

The Gander International Airport was used as a refueling station for flights crossing the Atlantic starting in 1945. This airport was once the largest Airport in the world. However, as passenger jets were designed to carry more fuel and be more fuel efficient, the airport saw less and less use as time went on. By the 1960’s few flights landed at the Gander International Airport and it started to become an infrequently used airport.

The on September 11, 2001 the terrorist on the World Trade Center in New York happened and America closed its airspace. All the planes that were in the air when this happened had to be re-routed to land at the nearest airports. Suddenly Gander International Airport found itself to be a very busy airport. It suddenly found itself hosting 38 passenger planes with over 6000 passengers and crew. The town of Gander had a population of around 10,000 when they received the influx of people.

The book details the stories of several passengers who landed in Gander on that day and how the towns people of Gander came together and helped a group of people they didn’t even know. The people of Gander gave food, clothing, necessities, their homes, and most importantly their time. The stories shared stress the importance of coming together during difficult times, knowing that everyone around you has a story and a struggle, and the importance of love and laughter during a difficult time. It demonstrates the bonds of human kindness and hope when a town offered everything they had to a group of strangers. For 6 days the people of Gander worked tirelessly. They never had any 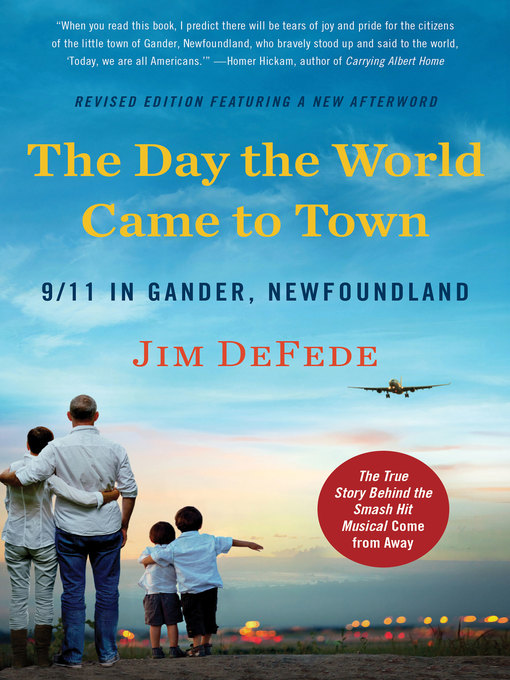 expectations of getting anything in return. They probably had no idea that they were changing the world and all the people that came to their island.

After Jim DeFede shared the story of this small town in Canada. Irene Sankoff and David Hein made a musical of the amazing story of human kindness during these dark times detailing the people of Gander and the Come From Aways as they like to call them in the musical Come From Away. I had an opportunity to see Come From Away when it came to Playhouse Square in Cleveland and I can say that it was one of the most moving and amazing pieces of theatre that I have ever seen. For an hour and thirty minutes I was glued to my seat and my eyes were fixed on the stage to hear this story.

Checkout The Day the World Came to Town in e-book and e-audiobook format on Libby or Overdrive. The e-audiobook is also available Hoopla.

Checkout the Original Cast Recording of Come From Away on Hoopla.